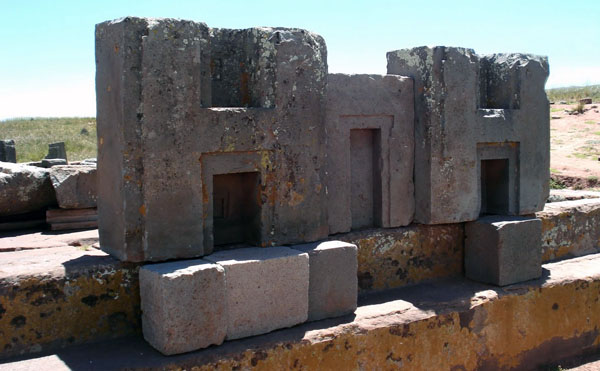 Above are from Puma Punku, Peru.

“Puma Punku (or Puma Pumku), a mysterious site located in Bolivia, has astounded archaeologists. It is part of a larger archaeological complex known as Tiahuanacu, and is considered to be one of the most important sites of Andean history.

An Austrian explorer named Arthur Posnansky performed a study on Puma Punku back in 1926. According to him and his supporters, Puma Punku is considered to be one of the oldest archaeological sites on the face of Earth, dating back to 13,000 BCE. Another group of archaeologists used the (unreliable) carbon dating method to date the site to about 400 AD.

The most intriguing thing about Puma Punku is the stonework. The red sandstone and andesite stones were cut in such a precise way that it’s as if they were cut using a diamond tool, and they can fit perfectly into and lock with each other. Another phenomenon of engineering is that each stone weighs up to 800 tons.  Interviews with modern day stone masons have revealed that even with today’s advanced technology, it would be almost impossible to replicate the precision observed in the stones found at Puma Punku.”

Regardless of the age, the stone work is amazing!

Stay tuned next week for more related to this topic.